VR scheme 2019 of BSNL and Terminal Benefits- Issue of Pension 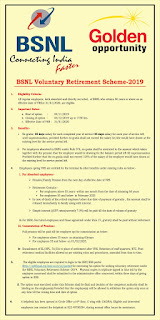 DOT in its letter dated March 3, 2021 addressed to one of the GS of Pensioners ‘ Association clarified that mentioning of BSNL VR Scheme 2019 in PPO would not result in taking away any due retirement benefits as per the existing rules provided for, from the pensioners on a later date. That is they will continue to get  the due  retirement  benefits- especially pension.

In addition to the lump-sum compensation or the amount of Ex-gratia as per Clause 6.1 of the Scheme, the employee(s) voluntarily retiring under the Scheme shall be entitled to terminal and other benefits, as applicable to the said employee(s) under existing rules. The payment of such benefits shall be made in the following manner:

Provided that the employee(s) governed by the EPF and Miscellaneous Provisions Act 1952 and EPS 1995, the pension shall be administered as per applicable rules.

For Direct Recruited the rules specifically mentioned as 1952 and 1995. But for absorbed, it is stated in a generalized way as per the existing rules and existing procedures. No specific rule is mentioned.

BSNL VRS 2019 optees after retirement started getting pension and PPOs also issued. Their getting pension is now part of the unique benefits mentioned as per the scheme  and the letter addressed to the Pensioners’ association reiterates the same.

DOT OM oct 29 2019 in para 2. iii speaks about preponed pension liability 12768 cr spread over 10 years. The approval for budgetary support  to this liability  is given by the cabinet decision dt oct 23 , 2019. The OM is silent about any pension entitlement as quoted by BSNL VR Scheme 2019 para 6.2 a. or as assured by the DOT letter addressed to the Pensioners’ association.

Other than this scheme of 2019 that is giving the unique benefits to the VR optees retired – and in the absence of    ‘generic of CCS Rules’ - if any rule DOT is having to sanction pension to these optees, then the same may be placed in the public domain for the benefit of the thousands of stakeholders.

Posted by PATTABI WRITES at 7:02 PM