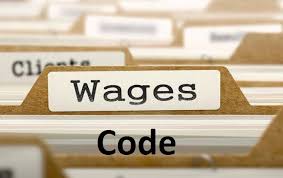 Some Clauses  of  the ACT

MINISTRY OF LAW AND JUSTICE (Legislative Department) New Delhi, the 8th August, 2019/Shravana 17, 1941 (Saka)
The following Act of Parliament received the assent of the President on the 8th August, 2019, and is hereby published for general information:—
CHAPTER I PRELIMINARY
1.    (1) This Act may be called the Code on Wages, 2019.

2.    (g) "contract labour" means a worker who shall be deemed to be employed in or in connection with the work of an establishment when he is hired in or in connection with such work by or through a contractor, with or without the knowledge of the principal employer and includes inter-State migrant worker but does not include a worker (other than part-time employee) who ––

(i)           is regularly employed by the contractor for any activity of his establishment and his employment is governed by mutually accepted standards of the conditions of employment (including engagement on permanent basis), and

Posted by PATTABI WRITES at 9:52 AM