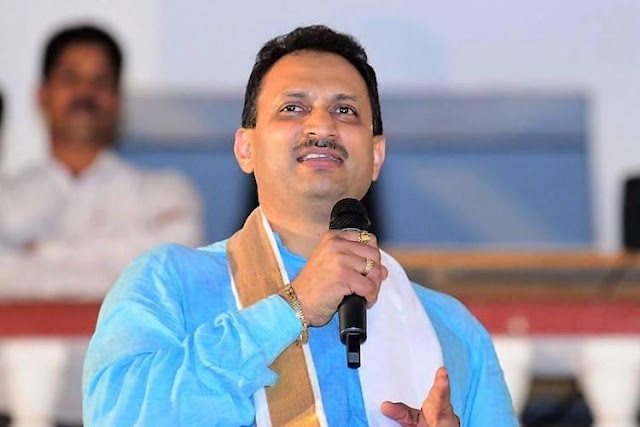 The Hindustan Times is reporting today about a speech of Shri AnandKumar Hegde MP of Karnataka in the following words.

"Former Union minister and Bharatiya Janata Party MP from Uttara Kannada Anantkumar Hegde, no stranger to controversies, has stirred up another one by calling BSNL employees ‘traitors’ and ‘anti-nationals’ who would be fired as they refused to work.

“The only cure for that is privatisation which our government will do. Some 85,000 will be fired and later on more need to be fired,’ he was seen saying in the video."

This naturally brings embarrassment to both the MOC/DOT and BSNL higher management and causing anger and protest amongst the BSNL employees. The Ex Minister though directly charging the employees and it has its own indirect strictures on the Minister in charge and Secy DOT the monitoring higher up and BSNL CMD with the Board members. These higher ups normally should own responsibility equally for good service as that of employees.

If the MP Shri Anand Kumar Hegdeji has any grievances, the same may be brought to CGM of Karnataka or to the CMD or to the MOC straight to take corrective action. BJP Govt at the behest of higher level decision headed by none other than PM has announced that the PSU privatization policy is going to come shortly. We don't know this MP has more power to announce BSNL privatisation than MOC/ MOF or PM. He has no patience to wait and see his own Govt's Policy that is being cooked.

This gentleman was MP and Minister in the earlier 16th LS also. His attendance was fairly good for that we have  to appreciate . He raised 285 questions in the last LokSabha  a lot about Railways, FDI, labour Laws but not a single question about BSNL or telecom. That was his past commitment about the welfare of the telecom system of India.

Another controversy that he raised was about his statement  that BJP was here to change the constitution. For this also he was made to apologise.

Now again today he shot into fame (of course notoriously) again by his remarks about BSNL employees.

1 charges related to Deliberate and malicious acts, intended to outrage religious feelings or any class by insulting its religion or religious beliefs (IPC Section-295A)

As per the ADR information in no case  he was convicted.

We hope that definition of Deshbhakt does not definitely mean  freedom to talk irresponsibly.

Posted by PATTABI WRITES at 9:22 PM