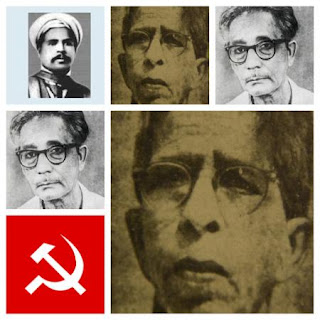 The First Indian communist Conference ( dec 26-28, 1925 Kanpur) was convened by Satyabhakta, a member of national revolutionary (terrorist) group in UP. He invited all the communist groups then functioning in India.

The conference became the instrument of bringing together all the genuine communist groups in the country, thus creating the first central committee of the CPI and framing its first constitution.

Satyabhakta objected to the name of CPI. The resoultions committee consisted of Satyabhakta, Joglekar, Bagerhatta, S Hassan, Ghate and Krishnaswamy of madras. As president M Singaravelu  chettiar, two joint secretaries Bagehatta and myself( Ghate) and an executive committee were elected. Muzaffar Ahmad was in the EC. Within 4 days satyabhkta announced formation of National communist party and left. When he was approached to handover the minutes and documents of the conference, he refused to pass them on since he had established his own party

It is significant to note that Muzaffar Ahmad recognised the significance of the first Communist conference in Kanpur in his articles of 1958 and 1963. Muzafar also reporting that Satyabhakta left the place with his papers and files. But after the split in his Myself and the CPI he wrote about that conference an entirely childish affair- he was for that Tashkent date.

The central secretariat met on 19th Aug 1959 having Ajoy Ghosh, BTR, P C joshi, Basapunnaiah, Z A Ahmad, dange, A k Gopalan took unanimous decision about foundation date as 1925. On Aug 20 1959 the same was communicated to Indonesian Communist party and the letter was signed by Com B T Ranadive

True, the Kanpur Communist conference of 1925 did not have the features of a proper foundation congress of a communist party. But the creation of an all India nucleus of a central leadership at the conference and its continuity and the role thro succedding years in building the mass base for the CPI make the conference a turning point in the life of the party.

I received a letter from satyabhakta asking me to attend without fail a communist conference being held in Kanpur. He also sent  Rs 30 by money order.

Those whom I met in Kanpur were Shamsuddin Hassan of Lahore, S V Ghate, K N Joglekar and R S Nimbhkar of bombay, Janakiprasad Bagerhatta of Bikaner, Ayodhyaprasad of Jhansi and C Krishnaswami Ayengar of Madras. Ayodhyaprasad of Jhansi told me that Krishnaswami was the nephew of rajagopalachari, which was afterwards confirmed by Krishnaswami himself. Besides meeting Hasrat Mohani and singaravelu Chettiar, I met Arjunlal sethi and Kumarananda. I met another person old man radhamohan Gokulji..

I did not know any of them personally..It was Ghate whom I saw labour very hard, he did typing and other jobs. Joglekar and Nimbkar were members of AI Congress committee- janaki prasad also.

Satyabhakata wrote letters to Saklatvala, inviting him to be president of the Kanpur conference. Saklatvala, it is surprising, agreed...the news was circulated all over India. But Communist party Great Britain asked him not to be president of a conference of A CP of obscure origin. this proved to be a blessing; for it was singaravelu Chettiar who was then chosen as President, in respect of views, he was  a safe person for satyabhakta.

The Conference was entirely a childish affair. All sorts of people- one could hardly follow who they were.. On Dec 26, 1925, when the conference was  in session, satyabhkta could not be traced anywhere. The man who was translating Singaravelu's speech was making repeated mistakes. Jalib, editor of Urudu daily hUMDUM got UP and translated

The Kanpur conference was held on a plot of land belonging to peasants on the other side of the road outside the Congress Nagar. Saklatvala sent a message but M N Roy not sent but wrote a letter to Ghate and Janakiprasad criticising the business.

In July 1924 the Communist international decided to adopt Roy's suggestion that a new Indian communist Party should be formed as a branch of the CI. Three months later, a correspondent to a Calcutta newspaper announced that " In cawnpore Bolshevik Conspiracy case it has  been settled that to have faith in communism in itself is no offence. Thus the fear of the law against Communism has been removed", while another newspaper announced the open formation of an Indian Communist Party with branches at Madras, Bombay and Cawnpore, and added that an AI Communist conference will be held in three months time". This first conference of its kind was duly held in the last week of Dec 1925.

Communism In India   by Gene Overstreet and   Marshall Windmiller

It was probably Muzaffar Ahmad who informed Roy of satyabhakta's plan to hold a communist conference in Cawnpore in dec 1925, concurrently with the annual session of the Indian national congress. In October Masses of India carried a despatch " It is premature to say what shape this Communist Party will ultimately assume and how far it is going to be communist in its program and actions"

When the conference convened on Dec 26 1925, S A dange and Shaukat Usmani were in jail. Muzaffar ahmad was released.

The conference suffered an initial setback when the Congress ( INC)  refused permission to hold the meeting in the Pandal setup for the session of Congress. another location was found..

In their speeches both Mohani and Singaravelu made a particular point of emphasising that the party was not connected with the communist International CI. Our organisation is purely Indian said Mohani.

Singarvelu was more specific: Indian communism  is not Bolshevism, for Bolshevism is a form of Communism which Russians have adopted in their country..

The party's executive committee met on dec 28 1925. Bergharhotta and Ghate were elected general secretaries and Ahmed and Iyenkar were appointed secretaries for their areas.

Roy had attacked Bhakta bitterly in Masses of India  and criticised the speeches of Mohani and singaravelu labeling them Childish.

Posted by PATTABI WRITES at 9:58 AM

Email ThisBlogThis!Share to TwitterShare to FacebookShare to Pinterest
Labels: Parties