For the Kind Attention of BSNL Absorbed Pensioners

For the Kind Attention of BSNL Absorbed Pensioners

I happen to see a letter addressed to Secretary DOT regarding Pension Revision according to CCS Pension Rules 2021 Rule 66 demanding Pension Revision of BSNL absorbed pre 2017 Retirees from 1-1-2017 as per 7th CPC fitment. I request all the concerned to have a comprehensive reading of connected rules to get better understanding. I am not discrediting the wisdom of any leader. Speaking truth to the authority is honesty and speaking truth to the near and dear also not dishonesty – it is very much honesty also. 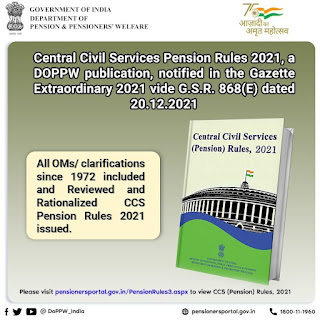 7. The cases of Central Government employees who have been permanently absorbed in public sector undertakings/autonomous bodies will be regulated as follows:-

Where the Government servants on permanent absorption in public sector undertakings/autonomous bodies continue to draw pension separately from the Government, the pension of such absorbees will be updated in terms of these orders. In cases where the Government servants have drawn one time lump sum terminal benefits equal to 100% of their pensions and have become entitled to the restoration of one-third commuted portion of pension as per the instructions issued by this Department from time to time, their cases will not be covered by these orders. Orders for regulating pension of such pensioners will be issued separately.

12) A Government servant who has been absorbed as an employee of a public sector undertaking shall be entitled to exercise option either,-

(a) to receive pension or service gratuity, as the case may be, and retirement gratuity from the Government for the service rendered under the Central Government in accordance with rule 44 and rule 45; or

(b) to count the service rendered under the Central Government in that public sector undertaking for pension and gratuity.

(13) In the case of a Government servant who has exercised option under clause (a) of sub-rule (12), the pay which he would have drawn under the Central Government had he not been on deemed deputation shall be treated as emoluments for calculating the pensionary benefits to be paid by the Government and the pensionary benefits in respect of such employee shall be drawn and paid in the manner to be specified by the administrative Ministry of the public sector undertaking.

(14) A Government servant who has exercised option under clause (b) of sub-rule (12) and his family shall be eligible for pensionary benefits (including commutation of pension, gratuity, family pension or extra-ordinary pension), on the basis of combined service rendered by the employee in the Government and in the public sector undertaking in accordance with the formula for calculation of such pensionary benefits as may be in force in the Central Government at the time of his retirement from the Public sector undertaking or his death.

44. Amount of Pension.- (1) A Government servant, who retires under rule 33, rule 34, rule 35, rule 36, rule 37, rule 38 or rule 39, after completing a qualifying service of not less than ten years, shall become eligible for grant of a pension calculated at fifty per cent of emoluments or average emoluments, whichever is more beneficial to him, subject to a minimum of nine thousand rupees per month and maximum of one lakh twenty-five thousand rupees per month:

Provided that a Government servant who retires under rule 39 before completing a qualifying service of ten years but fulfils the conditions mentioned in sub-rule (9) of rule 39, shall also be eligible for an invalid pension calculated at fifty per cent of emoluments or average emoluments, whichever is more beneficial to him and the condition of completion of minimum qualifying years ten years shall not be applicable for grant of pension in his case

1.2 They shall come into force w.e.f the date their publication in the official Gazette