An Appeal to BSNL Trade Unions

An Appeal to BSNL Trade Unions

I was one amongst you some years back and an old practitioner of TUM . I may be known to some comrades and not known to many.

I hereby prefer an appeal as I feel the urgency of the situation. The BSNL absorbed Retirees’ Associations are started telling that DOT has taken a policy decision of delinking Pension Revision from the Pay Revision. For me absence of Pay revision for pension revision means ‘no pay revision’ in today’s context.

It seems from the slides of DOT that the Post 2017 pensioners pension will also be settled by means of an open ended notional Pay . This tantamount to say that for changing their pension fixed as per 2nd PRC to 3rd PRC scales, DOT need not to take any Pay Revision as it was done earlier in 2011 order or 2016 order.

DOT is having only Executive scales as mentioned by 3rd PRC/ DPE. If they approve it then they have scales for Executives. We do not know how without any Pay revision to Executives- the one need to be projected by BSNL afresh, DOT selectively approve the scales, date of effect, IDA merger points and any fitment in between zero to 15 percent.

It is up to DOT to settle the issue of pension revision whether taking all these issues or not, as DOT knows better the hindrances than me. 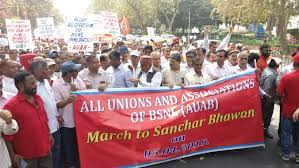 For NE there is no agreement as on date and so no authorized or Wage committee approved scales. Though some pensioners’ associations are demanding and putting forth the NE scales discussed in the wage committee, BSNL needs an agreement to forward the same to DOT. Here also neither BSNL nor DOT can selectively take the pay scales alone from the wage agreement, if at all anything reached. They cannot bring an agreement on pay scales only without taking the overall issue of Pay Revision

If DOT wants the scales of NE for Pension Revision - that is possible only if there is a wage agreement between BSNL management and the recognized Unions.

Recognized Unions are trying their level best in the reconstituted wage committee. The issue may be construction of scales as that of Executives calculated with the scope of 15 percent fitment. BSNL is objecting it on the plea of higher pension contribution to DOT. But in the case of Executives, it has to agree higher contribution as BSNL has no say on it.

If DOT is convinced getting assurance for one time exemption that is exemption to pay enhanced contribution till the date of issuance of DOT’s approval for wage revision or till the effective date of VRS that is up to Jan 2020, then that may cause the burden of BSNL lessened.

The next issue may be regarding the fitment percentage. This I think can be clinched by agreeing by the reverse linkage method. The fitment for wage revision may be as that of the one which DOT prescribes for pensioners for Pension Revision that is in between zero to 15 percent . We can demand quoting pension revision percentage and get the same. This may help us to clinch the issue.

The major issue is how to get exemption for the BSNL for wage revision from the DPE order. DOT takes a shortcut bypassing this ‘seeking exemption’ route for carrying out the task of pension revision. No DPE guidelines are standing as a bar to pension revision of its pensioners to DOT. The only necessity for it is the need  concurrence of DOE of MOF for meeting the further expenditure and approval of cabinet for implementation.

For amendment to 37 sub rule of 2021, for pension fixation on notional pay it needs DOPPW approval and that department is positive for the same.

As I see the things, I feel the task for unions become urgent to clinch the issue of wage agreement and sending the same to DOT as early as possible.

Pressing the DOT to take the issue of wage proposal of Executives to the Cabinet for logical conclusion, simultaneously with the issue of pension revision will solve the issue of interconnected ness ( pre, post, employee) prevailing all along in the last 22 years in the BSNL and even  earlier when we were all Govt employees. Even today the CPC through 7 th CPC maintained the inter connectivity between CG Employees and CG pensioners.

I appeal to the unions to consider my appeal. I always repose my faith on the leaders and in their wisdom. If pay revision is also settled on the analogy of pension revision that will protect the morale and welfare of all.

Sorry to bother you

With all comradely love

Posted by PATTABI WRITES at 1:03 PM