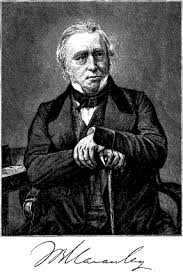 Lord Macaulay (Thomas Babington Macaulay) was born on October 25, 1800, and died on December 28, 1859. He arrived in India (Madras) on 10th June 1834 as a member of the Supreme Council of India. William Bentinck was the then Governor General. He returned to England early 1838, and resumed his writing career there. Macaulay was in India, thus, only for nearly four years, but he was destined to impact the lives of millions of Indians forever.

Macaulay's Minute on Education was dated February 2, 1835. The Governor General of India, William Bentinck approved the Minute on March 7, 1835 and it became the cornerstone of British India educational policy.

What then shall that language be? One-half of the Committee maintain that it shouldbe the English. The other half strongly recommend the Arabic and Sanscrit. The whole question seems to me to be, which language is the best worth knowing?

I have no knowledge of either Sanscrit or Arabic..I have never found one among them who could deny that a single shelf of a good European library was worth the whole native literature of India and Arabia. The intrinsic superiority of the Western literature is, indeed, fully admitted by those members of the Committee who support the Oriental plan of education.

We have to educate a people who cannot at present be educated by means of their mother-tongue. We must teach them some foreign language....I can by no means admit that when a nation of high intellectual attainments undertakes to superintend the education of a nation comparatively ignorant, the learners are absolutely to prescribe the course which is to be taken by the teachers. It is not necessary, however, to say anything on this subject.

THE INDIAN PENAL CODE WILL REPLACE SANSCRIT AND ARABIC TEXTS :

The fact that the Hindoo law is to be learned chiefly from Sanscrit books, and the Mahometan law from Arabic books, has been much insisted on, but seems not to bear at all on the question. We are commanded by Parliament to ascertain and digest the laws of India. The assistance of a law Commission has been given to us for that purpose. As soon as the code is promulgated, the Shastras and the Hedaya will be useless to a Moonsief or Sudder Ameen. I hope and trust that before the boys who are now entering at the Madrassa and the Sanscrit college have completed their studies, this great work will be finished. It would be manifestly absurd to educate the rising generation with a view to a state of things which we mean to alter before they reach manhood.

we are free to employ our funds as we choose; that we ought to employ them in teaching what is best worth knowing; that English is better worth knowing than Sanscrit or Arabic; that the natives are desirous to be taught English, and are not desirous to be taught Sanscrit or Arabic; that neither as the languages of law, nor as the languages fo religion, have the Sanscrit and Arabic any peculiar claim to our engagement; that it is possible to make natives of this country thoroughly good English scholars, and that to this end our efforts ought to be directed. In one point I fully agree with the gentlemen to whose general views I am opposed.

I feel with them, that it is impossible for us, with our limited means, to attempt to educate the body of the people. We must at present do our best to form a class who may be interpreters between us and the millions whom we govern; a class of persons, Indian in blood and colour, but English in taste, in opinions, in morals, and in intellect. To that class we may leave it to refine the vernacular dialects of the country, to enrich those dialects with terms of science borrow2ed from the Western nomenclature, and to render them by degrees fit vehicles for conveying knowledge to the great mass of the population.

Christian Missionaries have vehemently differed from one another about the usefulness of English as a tool for the purpose of communicating the story of Jesus to the natives of India, and to futher the socio-economic development of Indian communities.

H. T. Prinsep who was Secretary for matters pertaining to education. He  took objection to the procedure adopted in obtaining the signature of the Governor General in some secrecy. Secondly, he objected to the various arguments offered by Macaulay in support of his position.

On March 7, 1835 Governor General Bentinck issued an order that supported the position of Macaulay, with some slight changes. The order said:

First, His Lordship in Council is of opinion that the great object of the British Government ought to be the promotion of European literature and science among the natives of India; and that all the funds appropriated for the purpose of education would be best employed on English education alone.

Second, But it is not the intention of His Lordship in Council to abolish any College or School of native learning, while the native population shall appear to be inclined to avail themselves of the advantages which it affords, and His Lordship in Council directs that all the existing professors and students at all the institutions under the superintendence of the Committee shall continue to receive their stipends. But his lordship in Council decidedly objects to the practice which has hitherto prevailed of supporting the students during the period of their education

Third, It has come to the knowledge of the Governor-General in Council that a large sum has been expended by the Committee on the printing of Oriental works; his Lordship in Council directs that no portion of the funds shall hereafter be so employed.

Fourth, His Lordship in Council directs that all the funds which these reforms will leave at the disposal of the Committee be henceforth employed in imparting to the native population a knowledge of English literature and science through the medium of the English language; and His Lordship in Council requests the Committee to submit to Government, with all expedition, a plan for the accomplishment of this purpose

Posted by PATTABI WRITES at 3:15 PM

Email ThisBlogThis!Share to TwitterShare to FacebookShare to Pinterest
Labels: Natioanlity