One of the versatile genius of P&T Trade Union movement, great author of many books on Marxian perspectives, relentless critic of social inequality existing in the Indian society and a fighter of secular values, comrade Daniel  Gnanaiah  Ponraj is no more.  He had lost his breath on the early morning of july 8th 1917. He was at his initial months of 97th year. Com DG was a father figure and inspirer to many young comrades of Tamilnadu.  Comrade Gnanaiah had been a very close associate of Com O.P Gupta for more than 50 years. 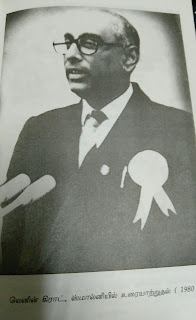 Born in pro German Lutheran Christian family, com DG had his communist initiation in his native area near Madurai, even before he entered in the postal services as an employee. He was associated with the student movement and local kisan sabha.  His higher education was at the famous American college, Madurai where many ‘later day leaders of communist movement’ were educated.
During the time of Second World War, he was compelled to undertake Army Postal Service, which helped him to broaden his world vision. He was just 21 when the world opened its door to him and it was the period in between 1941 and 1946. The Cairo library was his great meeting place of various revolutionaries’ ideas. He read books of H G Wells, Webb, Marx- Engels, Bernard Shaw and John Strachey and had discussion with all friends of socialist ideas.  He was befriended another stalwart of postal and leader of P&T movement com Premanathan.  These friends were seriously watching the advancement Indian freedom struggle and people’s war slogan of Soviet Union. When he was at Karachi, he heard the news of RIN Royal Indian Navy struggle for freedom and other demands.
On hearing the appeal of comrade P C Joshi, then General Secretary of CPI com DG and Prem collected Rs 2000, not a small amount in 1945-46. Both the young friends had gone to Bombay to hand over the same to the leader. There he met and acquainted himself with com BT Ranadive, Mohan Kumaramangalam, Adhikari and Joshi.  On his arrival to India, he was posted at Trichy where he developed contacts with the local union leaders.  On hearing com Gupta’s efforts for the unification of P&T movement, he stood solidly with Gupta at Akola Conference and fought for that line in Tamilnadu .  He had a chance to meet Gandhiji at wardha Ashram.
During 1960 strike of CG Employees, he was arrested and released after the trail of 7 months. He got his suspension order and then dismissed from service. The great NFPTE union was derecognized. Com DG did his yeoman service by collecting relief materials and money and dispatched to the needy. The former Deputy Speaker of Loksabha, and a veteran leader of DMK party, then an  employee Shri G Lakshmanan was also received the relief.
Com DG had played a major role in the discussion and formation of JCM negotiating machinery and Compulsory arbitration , shaped the events in favour of CG Employees. He fought against Government’s stand of placing condition of abjuring strike for acceptance and formation of JCM. His speech on the inaugural day of JCM was much appreciated by various shades of leaders of  CG Movement.   Various trade unions of CG Employees should thank leaders like DG, O P Gupta for their contribution of this greatest achievement for bringing a permanent negotiating forum for them continuously in the last 50 years. Com DG had gone England for learning the functioning of whitely council.
He had a chance to visit Brussels for international meet of PTTI. There he debated openly with the Secretary General of PTTI against his notion about proletarian Internationalism.  Com DG along with Gupta had gone to Soviet Union on the historic occasion of Golden Jubilee celebration of 1917 soviet revolution, participated the special session. Unfortunately on the occasion of its centenary celebration in 2017, his demise was incidentally coincided. Again he had a wonderful chance of visiting Soviet Union and addressed the session on NoV 7, 1980 at Lenin Academy of Social Sciences where he had undergone his higher studies on Marxism- Leninism from the same podium Lenin addressed to the people after the great soviet revolution. 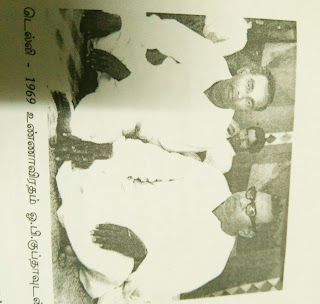 During the time of September 19, 1968 strike he led the entire CG movement with great courage and Vigour. He was arrested one day earlier to the strike and imprisoned at Tihar jail. He guided the movement through   his drafts   from Tihar, even when he was behind the bars.   NFPTE was derecognized.  He fought with com Gupta for full restoration of recognition from Branch to higher federation level. He had undergone indefinite fast   with com O P Gupta. The movement was received serious political attention and veteran leaders of various parties supported the fast. Leaders   like Vajpayee, Dange, Bhupesh, Achutanandan, Chandrasekhar, Mohan Dharia, Aruna Asaf Ali all came to the spot and greeted the fasting comrades. Mohan Dharia and Aruna mediated with the Government and the fast ended after 8 hectic days.
Com DG  as the editor of P&T labour worte many educative articles and exposed the policies of then Government. During the time of emergency the journals were censored and not allowed to reach the branches. Com Jagan made extra efforts to send them from Tamilnadu thro Tamil  journal.  On the formation of Janata Government  Shri George Fernandez was appointed as MOC. Com DG met him and narrated the problems of victimization.  Fernandez personally gone thro the files that forbidden DG’ s re-admission to Postal service which one was struck by Sankar Dayal Sharma and  cleared  the same and made way for DG to re-enter into the services and then  DG had attained his  superannuation.   This was his 5th time of his re-entry to the services facing suspension, dismissal, compulsory retirement etc. 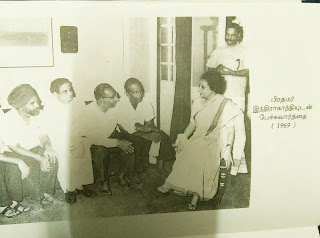 Handing over the post of Secretary General to Guptaji, com Gnanaiah focused his attention to educate the comrades on Marxism. He had become a known CPI  and AITUC leader within a short span of 10 years since 1978. He had been in the National Council, Control Commission of CPI. As Vice president of  AITUC, he had ably conducted education camp to AITUC workers  which one was appreciated by many. He had his close association with senior leaders / Comrades  like Dange, Rajeshwar Rao, Mohitsen,  Indrajith Gupta, A B Bhardhan and shaped the policies of CPI by discussing with them and his closeness with leaders  like comrades Manickam, Nallakannu, D Pandian, Gopu, S S Thiyaga Rajan helped to shape the  political line of Tamilnadu CPI.  He had been a consistent fighter for social justice and he has authored a lot about Mandal commission. He showed his anger in his younger days for  separate water pot for high caste Brahmins and had that courage to break them in the office premises itself. 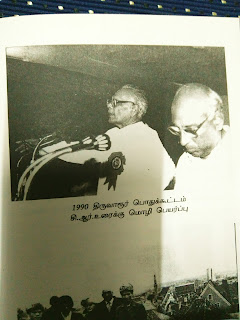 He had been one of the finest associate and colleague of Gupta and inspired many  next generation leaders like Comrades Jagan,  RK, Muthiyalu, M L Sharma, B P Sharma and other   youngsters like  Mali, Tamilmani and Mathivanan of the Telecom movement. He was the builder of the educational institutions like Workers Education Centre for the working class of Tamilnadu . He conducted many educational camps for rationalizing them and to make them to understand the importance of class struggle in our society. He ably taught them to understand the caste question and the importance of the movement of social justice. Whenever he had the chance of meeting CPI, CPM leaders, he expressed his longing for the left unity. He never failed to criticize the left also when he felt the shortcomings. He had taken much efforts to understand India, its history, social inequality, the dimension of Hindu- Muslim strife and Unity and he never minced words to narrate the contribution of Islam and the role of leaders from that community for the advancement of progressive movement.
He had authored more than 25 books in all the above subjects. His bio sketch was captioned as ‘ I ALSO RAN’. His narratives on the history of P&T movement – ‘Glimpses’  were well received by the workers. He had authored a short history of CPI also. In his last days he labored much to elaborate the history of Communist movement. He was very fond of receiving comrades for intellectual discussion and for proper updating of current development in the Marxian movement. It was awesome to see a comrade even at the age of 96 reading and writing daily hours together.  Com DG a tireless personality always with the thirst of learning and   taking the learnt things with great  responsibility  to the younger generation would live with all of us thro his memories and write ups. Let us learn from him and rededicate ourselves for the cause that he stood all these years.
Let every worker of  P& T, and  a member of Indian working class    be proud of this great comrade  and let us salute him  for his  valuable contribution to  the society that we are living and kicking.

Posted by PATTABI WRITES at 8:10 AM