A Visionary Trade Union Leader- A Man of settlement

A Visionary Trade Union Leader- A Man of settlement

Com Om Prakash Gupta was a great leader and father figure of Telecom Trade Union movement. He was a youth when the freedom movement was going on and took his mantle as the leader of United Union of Postal and Telegraph workers by 1946. A man of 24 years with all revolutionary spirit, he was like all other youths of that day. But he was active with many CPI leaders of that day especially with Com Dange, he understood the constraints of the Government Employees and their role in the TU Movement. 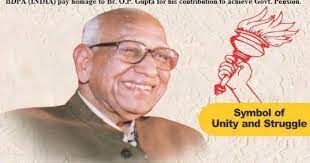 He made p&T movement NFPTE as his experimental theatre and decided not doing any parroting of Marxian or ideological jargons but implementing the question of uplifting and wiping out discrimination and inequality prevailing in that industry and the society. In that way he built his own small 'Telecom republic' using NFTE as his tool with many of his ideas and with great tolerance , unifying lakhs of workers in an unique way with the help of many like com Jagan etc.

Com OPG studied the Indian society and its psyche and felt the necessity of using Marx-Lenin-  Gandhi- Nehru- Ambedkar in appropriate places and situations. OPG wanted that Marxism should be applied as per the context and situation and if any struggle to achieve then that should be Gandhian form of Satyagraha- non cooperation with self suffering of leaders.

For emancipation of downtrodden Mazdoors, he applied the theory of Marxism and for departmental cadre upliftment he used Lenin's self determination theory, for restructuring of productive forces he used Dialectical materialism, for self suffering and exemplariness he imbibed Gandhi, for modernization of industry allowing technological growth he used Nehruism, for reservation and republican democratic fraternity  he learned that from Ambedkar. For the majority and minority reconciliation, he took the lessons of Hindu - Muslim unity and partition aftermaths.

When a great issue of conversion of Operative units of DOT to BSNL, he took the issue in a pragmatic way ( when many of us were shouting with mouthful ideological slogans), and fought the then shri Vajpayee Government and ensured the guaranteed Pension from GOI for the combined service of both Govt and PSU. The singular achievement in that is though these telecom employees losing their Govt employees status and attaining PSU employees status, they are getting pension from the GoI and as per the Govt formula on that date of CG employees retiring.

When settling demands, OPG was never greedy to acquire more, just because having the bargaining strength. OPG never approached the settlement of the issue on emotional or dogmatic and unreasonable grounds. When going to negotiating table, he had gone with great logics, reasons, facts and  the tools for justification of his case recital. He never considered himself as a scholarly man of knowledge, and always acted with the consciousness of his personal limitation and his movement's limitation. This he learnt from Mahatma Gandhi. The principle of applying 'Even one step enough’ was also taken from Gandhiji,  but he added a tag to that 'with all'.

When settling the issue of continuation of Govt Pension from Govt of India, he was not greedy to get more pay like PSU employees and he was willing to settle ‘Pension pay’ as that of CDA employees. Unfortunately he was ridiculed politically by many as ‘low quotation’ when he opened his mind to the workers , and employees were also fallen prey to that unsafe net.

He understood the administration and the officers’ mindset and knew that, once convinced they cannot approach the issue in mere TU angle. As administrators, they have to do justification with logics, reasons and with facts when the issue is taken to many related departments and to Cabinet. Govt is expected to spend money when there is utmost necessity is the experience of many leaders of the Union.

As a leader com OPG never failed to bring the trained bureaucrats to the conciliation with the accepted track and with a win win feelings. Let us learn and relearn the art of negotiations and way of conducting an organistion from the Visionary leader com O P Gupta.

Email ThisBlogThis!Share to TwitterShare to FacebookShare to Pinterest
Labels: Leaders